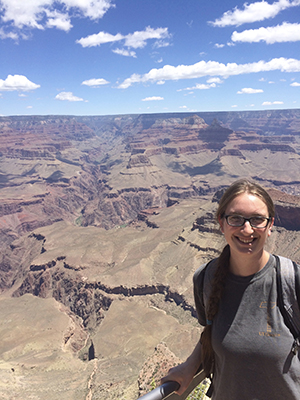 I am a second-year master of science student in the University of Tennessee Department of Earth and Planetary Science. My research is in the areas of planetary geomorphology, compressional tectonics, and geologic mapping using remote sensing data.

Wrinkle ridges (WRs) are ridges found on multiple planets in the solar system and are thought to have formed by tectonic compression and folding of rocks. My thesis project focusses on mapping and analysis of WRs in the Aeolis Dorsa (AD) region of Mars. The AD region is just north of the global dichotomy on Mars, which separates the northern lowlands from the southern highlands. This is significant because the formation of this dichotomy is not well understood yet. My research is part of a larger project to produce an official United States Geological Survey geologic map of the AD region and will contribute to a better understanding of the tectonic and geologic history of this region.

WRs on Mars have a wide range of sizes, from regional (100s of km long) to local (10s of km long). Many of the ridges in AD are much smaller in length (<20 km) than those previously studied on Mars and other planetary bodies, and thus will help us understand tectonic deformation on a more local scale. My hypothesis is that WRs in AD formed under a regionally homogeneous stress regime. This means that the forces that formed the ridges did not change direction while ridges were being formed. To test this hypothesis, I am using my finished map along with elevation data for this region to find the geographic orientation and amount of compression. While analyses are not yet complete, my data so far shows two different orientations, which suggests that the direction of stress did change during WR formation.

The flagship campus of the University of Tennessee System and partner in the Tennessee Transfer Pathway.